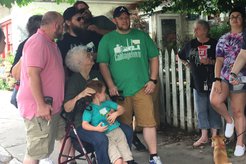 What does my death matter, if by our acts thousands are warned and alerted…

We are very excited about our next episode of “Adam’s Edge: Yesterday, Today, and Tomorrow in Historic Cabbagetown ATL.”

In Episode 2, The Patch Works will be chatting with long-time Cabbagetown residents and musicians, Steve Seachrist and Katie Butler. Steve and Katie epitomize the crop of musicians and artists who descended on Cabbagetown after The Mill closed. Upon arriving, both of them immediately became active in the community (for a few years, Katie was the president of the neighborhood’s CNIA, and Steve continues to participate in organizing the annual Cabbagetown Concert Series), while also writing and performing their own original music. We’ll learn about their personal stories, as well as getting to hear some of their amazing music, which they’ll be playing live… Listen in on Friday April 16th, when The Patch Works will be airing “Adam’s Edge: Episode 2 – Steve and Katie.”

This site uses Akismet to reduce spam. Learn how your comment data is processed.

We apologize, but the museum is currently closed to the public. In the meantime, please enjoy the content on this website and continue to look for upcoming online events. Thanks, y’all!